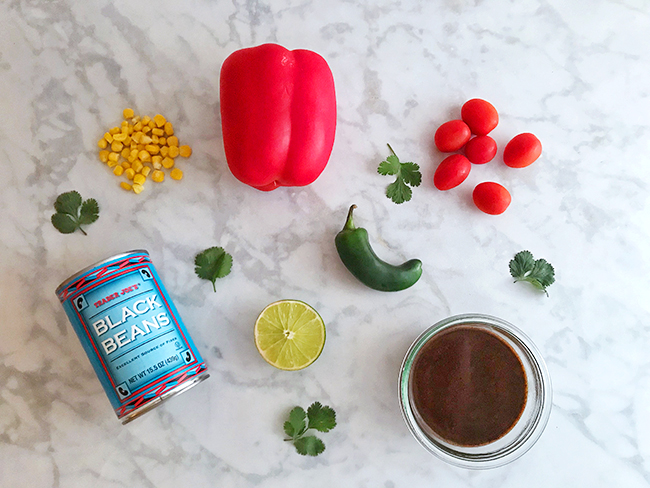 Is everyone else as confused by the weather lately as I am? The last two days, Boston reached about 70. In February. And now today we’re only maybe hitting 40, and there’s light snow-ish-ness. I’m definitely not complaining about the mini heat wave, but it’s weird to have such crazy fluctuations. The grey weather, though, makes me happy to stay inside all day (since it’s my day off today, anyway), not actually get out of sweatpants, and instead slowly cook my way through a few projects for the day. While listening to Otis Redding, because honestly that just makes any day better. I spent the morning reading, made a individual portion dutch baby smothered in fruit, a bit of lemon juice, and some maple syrup for breakfast, and then made Gimme Some Oven’s Homemade Red Enchilada Sauce in preparation for making this stuffed pepper recipe to share with you all. I was totally planning on just buying it, but a: the grocery store was out yesterday when I stopped in for it, and b: this way I could leave out the garlic that I oh so sadly can’t eat anymore (if you do make her recipe, and unlike me actually can eat garlic, please please do add it!). Win-win in the end, I think.

Anyway, this is one of my go to recipes any time of year.  Cozy enough for winter, but still light enough for summer. And somehow, I never posted this last summer, when I was making it allll the time. Especially later in the summer, when our poblano plants went crazy and we had so many amazing, crisp poblano peppers that held up so well to being baked. They stay crunchier than bell peppers, and have such a great delicate flavor to them that goes so well with the filling. They are more difficult to stuff, just because of the shape of them, and harder to top with melt cheese, but if you treat them sort of like enchiladas and just smother the whole pan of peppers, it works out juuust fine!

I don’t know if I’ve ever made exactly the same version of these more than once. The basic ingredients are always more or less the same: ground turkey, black beans, corn, either jalapeño or chopped green chiles (Hatch, from the can, because they’re tasty and so easy and I’m lazy), sometimes either chopped tomatillos or tomatoes, spices, and a bit of liquid of some sort. I love them with enchilada sauce, but they’re also great with just lime juice and maybe a bit of chicken stock. I always use chili powder, lots of cumin, oregano, maybe a bit of dried coriander, and salt and pepper. Obviously more or less of the spices, depending on whether or not I’m using enchilada sauce as well. But I taste a million times, to make sure I’m satisfied. Isn’t that the key anyway, and honestly one of the best parts of being the one cooking? Sometimes I seriously wonder how anything actually makes it to plates, considering how many times I ‘check’ on it. Trust me, this filling alone is so tasty you won’t want to wait for the bell peppers to cook! Flavorful, filling, and endlessly changeable, these stuffed peppers are perfect any night of the week.